Nearly two years after PewDiePie was widely criticized for testing the controversial limits of freelancer marketplace Fiverr (by paying two men $5 to hold up a sign saying “Death to all Jews”) he’s landed himself in hot water for promoting a YouTube channel that frequently posts anti-Semitic, racist, and white supremacy-related content.

PewDiePie, whose real name is Felix Kjellberg, promoted the channel, ‘EsemicolonR’ — ‘E;R’ for short — with a swath of others at the end of one of his latest videos, The Verge was the first to point out. (Kjellberg has now deleted E;R’s channel from his list of recommended watches in the video’s description.) He specifically recommended a video essay about Netflix’s live-action adaptation of the anime Death Note, in which the detective character ‘L,’ who was Japanese in the original manga and anime, was played by a black man.

“E;R does great video essays,” Kjellberg said. “He did one on Death Note, which I really, really enjoyed.”

In the video Kjellberg recommended, E;R jokes about and plays footage of the death of Heather Heyer, who was killed last year when a man drove his car into a group of counter-protesters at the white supremacist Unite The Right Rally in Charlottesville, VA.

And in the description for the video, which has been age-restricted by YouTube, E;R says, “The truth about why this took so long is because I thought it was so funny to call Black L ‘Niglet’ throughout all my recordings […] I eventually got it through my thick f-cking skull that YouTube’s looking for A N Y reason [presumably to take down hate speech-related videos], so I redid all the audio to erase my speech crime.”

Another of E;R’s videos proports to be about the cartoon Steven Universe, containing clips from the show — but in the middle of the three-minute video, E;R sewed in a series of headshots of Jewish public figures, including YouTube CEO Susan Wojcicki and Facebook CEO Mark Zuckerberg. They also added in a graph noting that “2% of the world’s population controls 96% of the world’s media,” echoing a conspiracy theory popular with anti-Semites that alleges Jewish people conspire to control the world by owning media companies.

The Steven Universe video ends with an edited version of ‘the 14 words,’ a white supremacist saying: “We must secure the existence of our people and a future for white children.”

E;R’s channel has gained more than 20,000 new subscribers since Kjellberg’s shout-out, bringing its total to 220,000. You can see how that played out in the chart below. E;R generally averages a half dozen or so subscribers an hour, but that changed after the PewDiePie shout-out. Kjellberg posted his video at around 7 p.m. GMT Dec. 9, and at 2 p.m. GMT Dec. 10, E;R saw a spike of nearly 3,500 subscribers in one hour. 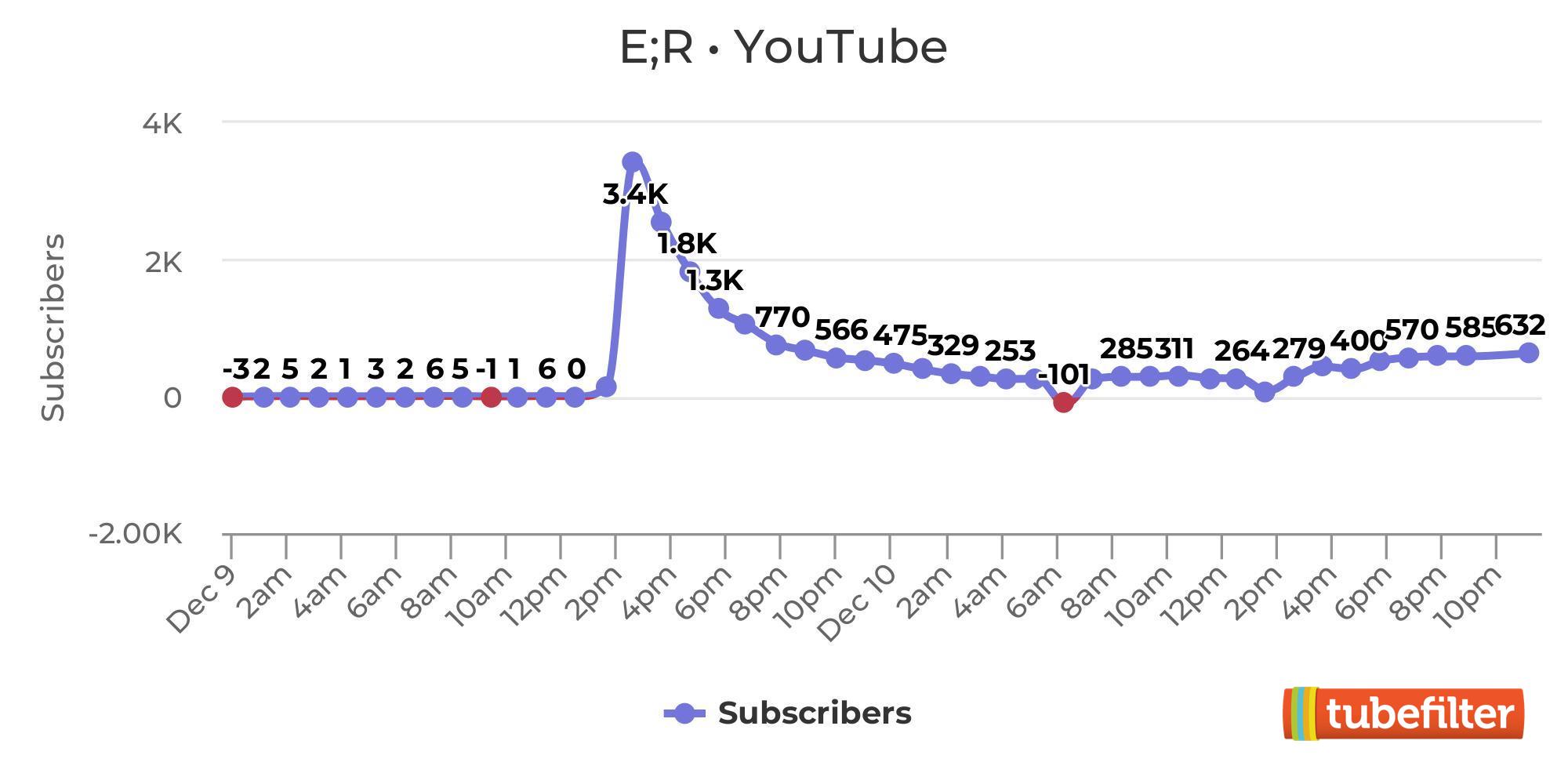 Kjellberg has received backlash from fellow YouTubers including The Young Turks host Hasan Piker, who posted a video of his own picking apart Kjellberg’s behavior and E;R’s videos.

yesterday pewdiepie ended #Subscribetopewdiepie in a video where he promoted some of his favorite channels. one of them was straight up a neo-nazi’s yt page where he makes video essays on children’s cartoons with added nazi propoganda https://t.co/KBIfpVdfXi

Last February, Kjellberg was dropped from his multi-channel network, had his YouTube Premium show Scare PewDiePie cancelled (something he later complained about after fellow controversial YouTuber Logan Paul had his Premium movie released), and was cut from Google Preferred –- which aggregates YouTube’s top creators into higher-priced packages for advertisers — as a result of his $5 ‘prank.’

Then, Kjellberg apologized on Tumblr, saying, “I was trying to show how crazy the modern world is, specifically some of the services available online. I want to make one thing clear: I am in no way supporting any kind of hateful attitudes.”

As of posting time, Kjellberg has not commented on his recommendation of E;R’s channel.

Kjellberg has posted a video addressing the reaction to his E;R shout-out.

In it, he said, “I was getting so much attention through all this #SubscribeToPewdiepie meme that I thought it would be nice if I gave a shout-out to some smaller channels that I enjoy. […] Now apparently one of those 28 likes to have hidden and not-so-hidden Nazi references in his videos. You know, obviously if I noticed that, I wouldn’t have referenced him in the shout-out — not because I have a problem with Nazi references being offensive in themselves, but because I said publicly, a year and a half ago, that I was going to distance myself from Nazi jokes and that kind of stuff, because I want nothing to do with it, and I don’t really care about it.”

Reading news headlines about the incident, he added, “‘YouTube star Pewdiepie now promotes anti-Semitic content.’ By what? By saying I enjoy his anime review?”

You can see his full video below.