By: Admin
In: SPORT
With: 0 Comments 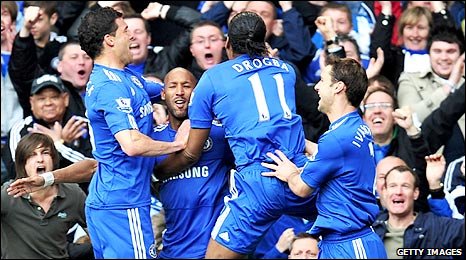 Carlo Ancelotti’s side needed victory to end Manchester United’s three-season reign as champions – and once Nicolas Anelka gave them the lead after only six minutes there was never any doubt they would reclaim the crown.

Chelsea were then able to put the gloss on their triumph with another dazzling display of attacking football that ensured Ancelotti’s first season in England ended with the biggest domestic prize in his grasp.

After putting seven past Sunderland, Aston Villa and Stoke City in a season that has seen them score more than a century of goals in the league, they celebrated by going one better against Roberto Martinez’s hopelessly outclassed side.

The thumping win is the biggest in their 105-year history and also saw them break the record for the most league goals in a Premier League season with 103.

Wigan’s cause was not helped by the first-half dismissal of defender Gary Caldwell. He was sent off for a foul on Frank Lampard that led to the England midfield man effectively wrapping up the title from the spot before half-time.

The second half was exhibition stuff with Salomon Kalou and Anelka on target again before Didier Drogba added the Golden Boot to Chelsea’s title with a rapid-fire hat-trick to take his total to 29 in the league this term. Ashley Cole’s crisp strike for number eight on the stroke of full-time provided a fitting finale.

Chelsea’s celebrations were suitably flamboyant – a reflection of their delight at ending the Old Trafford spell of supremacy in league combat.

It also marked a personal triumph for Italian Ancelotti, brought to Stamford Bridge by owner Roman Abramovich to redefine the style of Chelsea’s team and put them back among the major trophies.

Chelsea’s feat in becoming the first top-flight team to score 100 goals in the league since Spurs in 1963 was a reflection of the attacking intent Ancelotti has brought, especially on home territory. The ghost of Jose Mourinho, who won the league in 2005 and 2006 to end a 50-year barren spell, may not be banished completely, but Ancelotti has made an indelible mark.

He was loudly acclaimed by Chelsea’s fans throughout the second half – and let his normally impassive mask slip as he responded with a fierce clenched-fist salute to an ecstatic Stamford Bridge.

And Ancelotti can now set his sights on history as Chelsea go in search of their first league and FA Cup double when they face Portsmouth at Wembley next Saturday.

For now, however, the Premier League title will do for starters and the respect for Ancelotti was obvious in the way his players and staff raced to embrace him at the final whistle.

Chelsea’s early nerves – if indeed there were any – were settled as Anelka put them on the way to the title after only six minutes.

Wigan failed to clear Drogba’s free-kick and when Florent Malouda, from a suspiciously offside position, chested the ball into Anelka’s path he drilled a finish past Mike Pollitt at his near post.

Despite Wigan enjoying plenty of possession and territory without posing any serious threat to Petr Cech’s goal, Chelsea scored the second goal that sealed their title win 13 minutes before half-time.

Lampard raced on to Drogba’s flick and was hauled down by Caldwell as he closed in on goal. The Wigan defender was shown the red card by referee Martin Atkinson and Lampard scored from the spot with his customary expertise.

As Stamford Bridge celebrated there was one unlikely dissenter in the shape of Drogba, who appeared unhappy that he had not been allowed to take the penalty as he battled with Manchester United’s Wayne Rooney for the Golden Boot.

It was a huge over-reaction from the superbly gifted, but on this evidence high-maintenance, striker – with Lampard rightly reasoning the title still needed to be won and came before personal honours.

Chelsea emerged early for the second half and went into a team huddle, before putting their stamp on the title in superb style.

Kalou banished any lingering doubts that this would not be a day of celebration for the west Londoners when he exchanged passes with Lampard before beating Pollitt. And two minutes later Anelka started to put the gloss on another goal glut with a perfect right-foot volley from Branislav Ivanovic’s cross.

It was the signal for Ancelotti to send on Joe Cole for what might have been his final Stamford Bridge appearance as a Chelsea player, with a new contract still unsigned.

No team has been as ruthless as the Blues at punishing stricken opponents, and they set about putting Wigan to the sword as the home fans revelled in the slaughter.

Drogba finally got the goal he so obviously craved when he headed Chelsea’s fifth from Lampard’s cross – their 100th league goal this season.

The Ivorian striker was at it again for number six after 68 minutes when he finally got to take a penalty after Mario Melchiot fouled Ashley Cole. Lampard stood to one side as Drogba scored via a post – followed by elaborate celebrations that even involved a touchline hug for Ancelotti.

And they made it another seven-goal show with 10 minutes left as Drogba turned home from close range after Pollitt could only parry Joe Cole’s shot.

If the game required the perfect finish, Ashley Cole provided it with a low finish past the shell-shocked Pollitt – before joyous scenes engulfed Stamford Bridge at the final whistle.