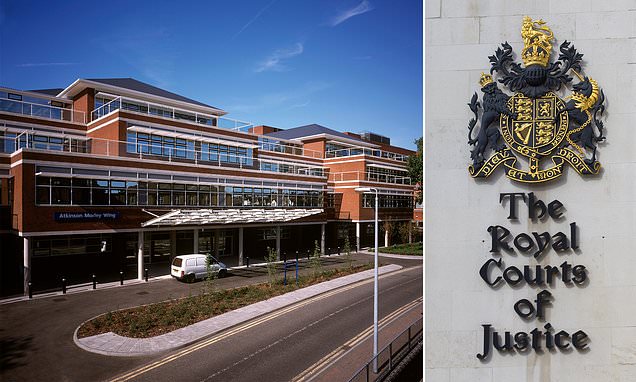 By Chantalle Edmunds For Mailonline

A woman is suing a London NHS trust for not telling her that her father, who had shot her mother dead, had been diagnosed with Huntington’s disease.

The woman, known as ABC, alleges that St George’s NHS Trust owed her a duty of care to tell her of her father’s diagnosis, given that doctors there knew she was pregnant.

She discovered he carried the gene for the degenerative, incurable brain disorder only after her daughter was born and that she too was carrying the faulty gene meaning her child has a 50:50 chance of inheriting it.

The woman, known as ABC, alleges that St George’s NHS Trust owed her a duty of care to tell her of her father’s diagnosis, given that doctors there knew she was pregnant

ABC said she wouldn’t have gone through with the pregnancy if she had known.

Her father was diagnosed with the condition in 2009 by doctors at St George’s NHS Trust, he then made it clear he did not want his daughter informed. She had told him she was pregnant. He told doctors he feared she might kill herself or have an abortion, as reported by the BBC.

What is Huntington’s disease?

Huntington’s disease is a condition that stops parts of the brain working properly over time. It’s passed on (inherited) from a person’s parents.

It gets gradually worse over time and is usually fatal after a period of up to 20 years.

Symptoms usually start at 30 to 50 years of age, but can begin much earlier or later.

Full-time nursing care is needed in the later stages of the condition. It’s usually fatal about 15 to 20 years after symptoms start.

Huntington’s disease is caused by a faulty gene that results in parts of the brain becoming gradually damaged over time.

You’re usually only at risk of developing it if one of your parents has or had it. Both men and women can get it.

If a parent has the Huntington’s disease gene, there’s a:

Very occasionally, it’s possible to develop Huntington’s disease without having a history of it in your family. But this is usually just because one of your parents was never diagnosed with it.

There’s currently no cure for Huntington’s disease or any way to stop it getting worse.

But treatment and support can help reduce some of the problems it causes.

He was convicted of manslaughter on the grounds of diminished responsibility and detained under the Mental Health Act.

At the time there were suspicious that he might be suffering from Huntington’s disease.

Symptoms of the disease can include: mood swings and personality changes, difficulty concentrating and memory lapses; depression; stumbling and clumsiness; involuntary jerking or fidgety movements of the limbs and body; problems swallowing, speaking and breathing; difficulty moving.

Four months after her daughter, who is now nine, was born, ABC was accidentally informed about her father’s condition.

She was tested and found that she had inherited the Huntington’s gene. Symptoms usually start at 30 to 50 years of age, but can begin much earlier or later.

To date her daughter has not been tested, but she will have a 50 percent chance of carrying the gene.

ABC told the BBC she would have had a genetic test and ended her pregnancy rather than running the risk of having a child who had inherited the disease and could have to look after a seriously ill parent.

Disclosure of personal information, without the consent of a patient, may be justified to prevent exposing others to a risk of death or serious harm.

At the time, ABC and her father were reportedly having family therapy organised by the NHS. ABC has argued that there was an an obligation to protect her psychological or physical well-being.

The obligation is seen as a cornerstone of the doctor-patient relationship, however, it is not fixed.

If ABC wins her case, it could lead to a major change in the rules governing patient confidentiality. It could also raise further questions over the duty of care that is owed to family members following genetic testing.

ABC’s case was first argued at the High Court back in 2015 when a judge ruled that a full hearing should not go ahead. The court heard that there was ‘no reasonably arguable duty of care’ owed to ABC.

However, in 2017, the Court of Appeal reversed the decision and said the case should go to trial.

ABC’s case was first argued at the High Court back in 2015 when a judge ruled that a full hearing should not go ahead. The judgement said there was ‘no reasonably arguable duty of care’ owed to ABC. However, in 2017, the Court of Appeal reversed the decision and said the case should go to trial

A spokesman for St George’s Healthcare NHS Trust said: ‘This case raises complex and sensitive issues in respect of the competing interests between the duty of care and the duty of confidentiality.

‘It will be for the court to adjudicate on those issues during the trial.’

2020-01-15
Previous Post: Over A Decade of True Stories and Photos from Our Viewers
Next Post: What Is Marketing?