Distribution: Found mainly in the southern counties of England but slowly spreading northwards

Special features: This is one of the more exotic looking spiders found in the UK. It’s a native spider of Mediterranean areas, and has only recently colonised England. Despite the warning colouration this is not a dangerous species. The wasp-like appearance is probably defensive, to deter predators.

The abdomen of the female features yellow, black and white stripes (hence the ‘wasp’ name), and her cephalothorax is covered with silver coloured hair. When viewed from underneath you can see two yellow stripes running lengthways along the abdomen. The off white coloured legs feature dark annulations (rings), and the third pair of legs are noticeably smaller and shorter than the other legs.

The male Wasp Spider is much smaller, and is only active for a couple of weeks in July. Although he doesn’t have the colourful wasp-like markings of the female, he does have two yellow stripes running along the undeside of his abdomen. Like many other male spiders, he has to be careful when mating, to ensure he doesn’t end up as a meal for the female.

The female builds her web close to the ground in order to catch grasshoppers and crickets. She can often be seen hanging upside-down in the middle of her web throughout summer and autumn. The web features a distinctive zig-zag patterned section running vertically through the middle.

The female Wasp Spider creates one of the largest egg sacs of any of the spiders found in Britain. It is urn shaped, pale brown in colour, often with dark brown vertical bands and about 25mm across. She fills it with eggs and then seals the top with more silk. 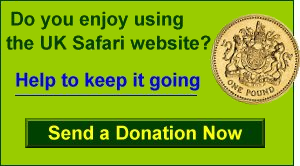