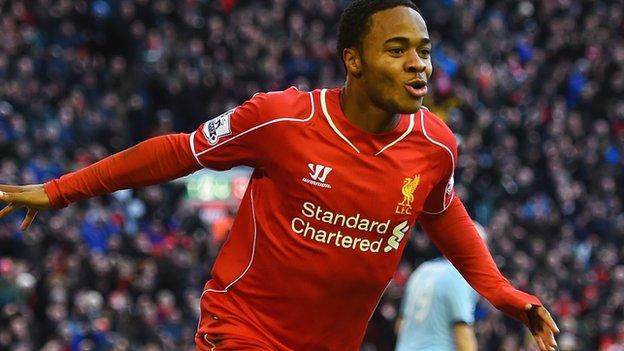 Raheem Sterling has told BBC Sport he is not a “money-grabbing 20-year old” after confirming he has turned down a new £100,000-a-week Liverpool deal.

He also says he will not discuss a new contract with the Reds until the summer, no matter how big a deal he might be offered in the meantime.

“It’s not about the money at all,” the England forward said.

“It’s never been about money. I talk about winning trophies throughout my career. That’s all I talk about.”

He added: “I don’t talk about how many cars I’m going to drive, how many houses I’ve got. I just purely want to be the best I can be.”

Liverpool’s last piece of silverware came in 2012, when they beat Cardiff on penalties to win the League Cup.

Sterling, who joined the Reds from QPR in 2010, did not become a first-team regular until the following season.

“I just want to be seen as a kid who loves to play football and to do the best for the team.”

Liverpool manager Brendan Rodgers said in February that Sterling had been offered an “incredible deal for a young player” but now accepts talks will have to wait until the summer.

“I am sure it will be resolved and the concentration for Raheem is now on his football and it is clear the terms of when those talks will begin again,” Rodgers said last month.

In the interview with the BBC, Sterling also said he would have accepted less than £100,000 a week had he been offered a new deal this time last year, when the Reds were chasing the Premier League title.

“If, at that point in time, I was offered a contract, I most definitely would have signed straight away, probably for far less money than being said now,” he said. “I just think the timing was a bit off.”

Sterling’s future has been a source of almost endless speculation, with stories tipping him for a move to Manchester City, Arsenal, Real Madrid and Bayern Munich.

“I try to kill it off, but I don’t think the public can see it that way,” Sterling said. “I think they just see it as this 20-year-old boy being greedy.

“I just want to take the time to think about what I’ve achieved in my career so far, where I need to go and what I need to do to get better as a player.”

Sterling said it was “quite flattering” to be linked with the Gunners, a team Liverpool visit in the Premier League on Saturday (kick-off 12:45 BST).

“I try to just block everything out and do well,” said Sterling, who has 14 England caps.

“Next game is against Arsenal and I want to do my best. I won’t be hiding. As I said, I’m just happy to be playing football.”

In his interview, Sterling said one of his targets for the remainder of the season was to help Liverpool win the FA Cup.

If they beat Blackburn in a replay next week, the Reds will face Aston Villa in the semi-finals at Wembley on 19 April.

Raheem Sterling exclusively told the BBC that he has already turned down an £100,000-a-week offer

“I want to win something at the end of the season and the FA Cup’s a great chance,” Sterling said.

Liverpool, who finished second to Manchester City in the Premier League last season, have already had to deal with the loss of two key players.

Striker Luis Suarez joined Barcelona last summer, while influential captain Steven Gerrard will leave the club at the end of the season.

The potential departure of Sterling, who scored his first senior goal for England in a 4-0 win over Lithuania in a Euro 2016 qualifier on Friday, would be another big blow.

“I just want to focus on football and, when it gets to the end of the season, assess my position as a 20-year-old player playing in the Premier League,” the Jamaican-born forward said.

If you want to hear more from Sterling, you can read some of his thoughts below or watch the embedded interview.

On speaking out now:

“I keep hearing I’ve rejected all sorts of contracts. Me, the club and my reps have spoken about it and put talks on hold until end of season, so it’s frustrating to hear the contract situation keep going on and on. I just wanted to get my point across on the whole thing.”

“In my head I’ve sat down and thought about it. But, at the end of the season, I just want to sit down with the club and my representatives. I will definitely give guarantees when the season has finished.”

“When I started out at QPR, I would never have dreamt of this day, to have such a huge offer in front of me. I’m really thankful. I just want to solely focus on my football right now. I want to win something at the end of the season and the FA Cup’s a great chance.”

On accusations he is greedy:

“The public just think you want more and that’s not the case at this moment in time. I’m just a kid that loves playing football. That’s how it’s been since I was a young kid. I’ve never ever wanted to demand anything off no-one, I’m just trying to demand the best of myself.”

On criticism from former players:

“I want the best for me and I want to reach my goals that I set out as a young kid. They’ve had their dreams when they were playing and that’s no different for me. Everyone is entitled to their opinion, but I won’t really take any notice of what they’re saying.”

On the constant contract speculation:

“The fans get a bit frustrated with me because I’m not signing straight away. They can get on your back a little bit, but this is football and you have to accept these things. I try to block it out of my head, which is the whole reason why I’ve said I want to wait till the end of the season.”

“I would never want the fans to think bad of me, to think I just want as much money for myself. I want them to understand it’s been a bit much for me this season, with everyone talking about it every minute.”

“Everyone’s dream growing up is seeing themselves in an away kit somewhere in a sunny country. But, in reality, I’m happy to be playing for Liverpool and trying to win trophies.”

“I speak to Brendan on good terms. He calls me when he needs to talk to me and I can talk to him when I want. There’s nothing bad to say or think about Brendan. He’s been really good to me since I came into the team and he’s always tried to help me.”

“The club has offered an incredible deal for a young player,” Rodgers said earlier in the season

On the departures of Suarez and Gerrard:

“You really want to be working with world-class players day in, day out. It’s obviously left a little dent, these two world-class superstars leaving, but I think we have good players coming through at Liverpool.”