‘God of War’ Valkyries: Locations and How to Beat Them 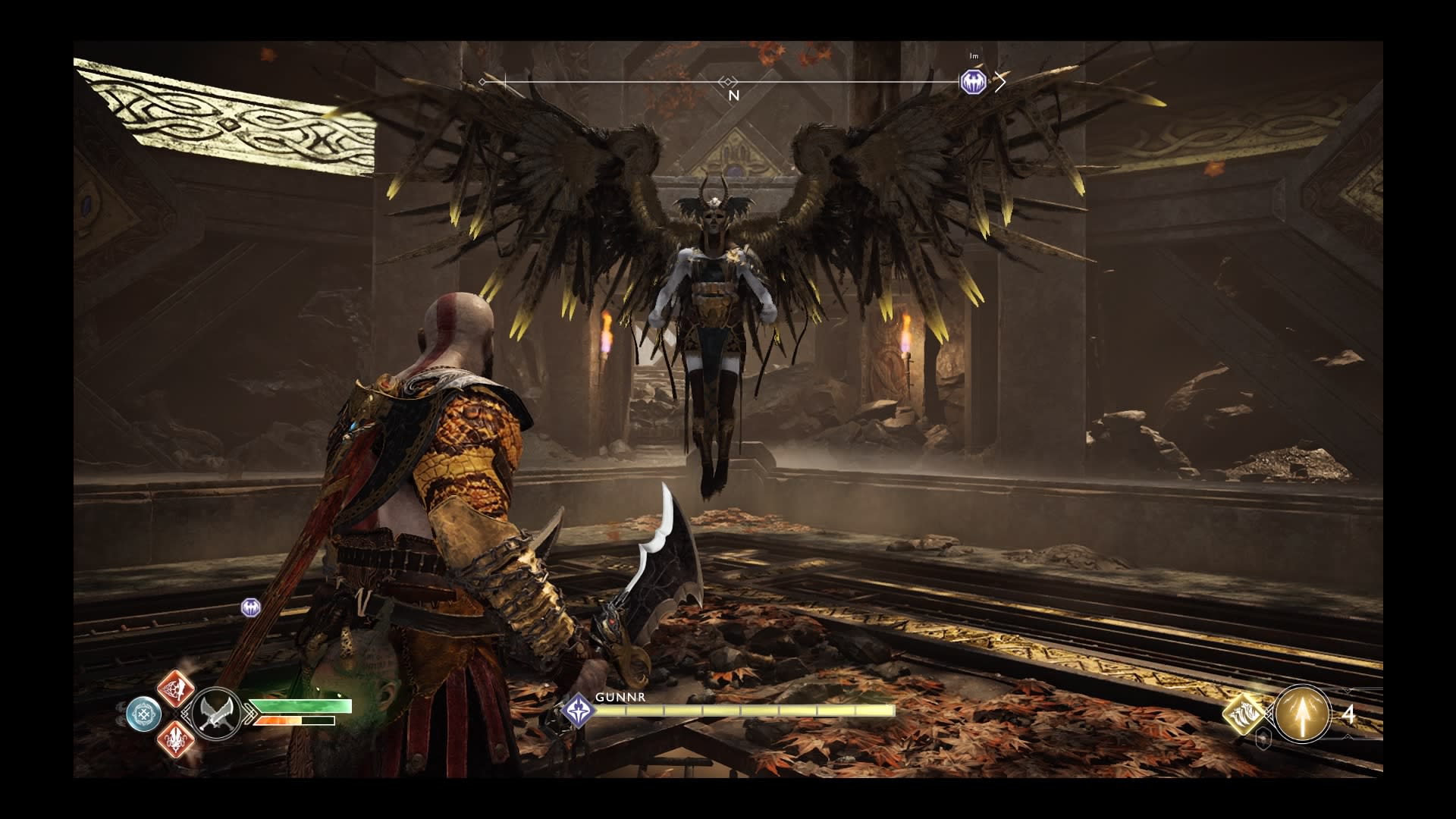 There are nine different locations to find the Valkyries, and you can find them on your own. Completing the main story will unlock the first eight locations. You will also need the Chisel to unlock the Hidden Chamber of Odin and six of the Valkyries, which is obtained during the story. We recommend players complete the main journey before seeking out these powerful warriors.

The ninth Valkyrie location can only be accessed once you’ve defeated the other eight and take their helmets to the Council of Valkyries, on the north side of Lake of Nine. This will summon the Valkyrie Queen.

God of War Valkyries: Locations How to find Beat Them guide tips strategy

Gunrir is a Slugger-type of Valkyrie, whose specialty is using her wings and scythe to cut you down to size. She uses four different attacks that you can learn to avoid once you’ve become accustomed to them.

During her wing combo, she rears back and swipes at you with a four-hit combo. You cannot block this attack, so you’ll need to evade to the side. Another one of her moves is the Double Scythe Swipe, when she spins her scythe in front of her before quickly lunging forward. You can parry or dodge this attack.

When she uses Scythe Chop Gunrir will lift into the air with her scythe and swing it downward. Evade to the side to have her miss and give Kratos time to deal damage while she recuperates. The Wing Stab is a backhand follow-up to her wing combo. It’s something to look out for and ican be avoided with a side evade.

When Gunrir is in the air, use Atreus’ shock arrows to knock her out of the sky.

Geirdriful is a Shooter type, which means you can expect a lot of projectile attacks. She still has the same Wing Combo as Gunrir.

This Valkyrie has a Blinding Shockwave attack where she flaps her wings, sending shockwaves toward you. This will cause blindness if you are hit, so use your quick turn to avoid it. When Geirdriful spins her scythe in front of her, she is getting ready for a Scythe Uppercut. This causes her to swipe the ground in an uppercut motion, sending out a shockwave in a straight line. Sidestep to avoid these attacks.

Geirdriful will also raise a pair of chakrams above her head, flinging them at you. It’s a fast projectile, so you’ll need your reflexes for this one. Her Swoop Grab is a barrel-roll swoop attack that will pin Kratos to the floor and do serious damage, so be sure to sidestep correctly.

Eir is a Defender-type Valkyrie who uses a shield to block your attacks, even after her own moves to avoid being hit. She also wields a mace she’ll use after her four-hit wing combo.

Eir uses Block to guardusing her wings. This will negate all physical attacks, and if you try to hit her she will open up her plumes to knock you backward. Perform a Block Break to get her out of this maneuver.

Eir’s Mace Wave has one-shot kill potential, so be careful! She will swing the mace as she floats the air before slamming down on you with it. Use your axe throw to knock out of the sky.

Kara is a Summoner-type Valkyrie who won’t do much of the fighting herself, instead electing to have the Draugr do it for her. When she does decide to join the fight, it’s mostly through projectiles. Your best bet is to let at least two Draugr remain in the battle so she won’t summon more.

Kara will throw two types of Chakram. The first is the normal straight line one that Geirdriful used. The other kind has Kara throw two Chakram on either side of you. You can block this attack, but you’ll be a sitting duck for the Draugr, so time out a parry to avoid both.

Rota is a Grappler type and uses a variety of grabs on Kratos that all deal massive damage. Like the other Valkyrie, Rota uses combos and Chakram throws, so remember how you countered those.

This Valkyrie’s Swoop Grab is similar to Geirdriful, performing a barrel roll before swooping down on you. Again, sidestep to avoid this attack, but beware as Rota may actually use this move three times in a row. Her other move is the Heel Stomp, which you can tell she’s doing when she flies high into the air. You can sidestep to avoid, but if you’re caught in this attack, she will continually stomp on you until you escape using the circle button.

Olrun is an Evader-type Valkyrie and far faster than the others. In addition to the familiar combos and Chakram throws, you’ll need to get used to using the Shock Arrows to knock her out of the sky when you have the chance.

This Valkyrie’s evasion move comes with an attack at the end. She will perform a double dash and then lunge at Kratos. She can perform a double evade after a wing combo, and then chain a second wing combo. You’ll need to be quick with the sidesteps to avoid these attacks.

Her other signature movie is a Spin projectile that will send shards toward you in a straight line if she’s far away. You can block these projectiles, but if you’re too close to her spinning, she will suck you in.

Gondul is a Fire-type Valkyrie, so you’ll have an advantage using the Leviathan Axe. However, this Valkyrie has plenty of signature moves to go along with the usual wing and swoop attacks.

One of Gondul’s moves drops meteors from the sky, so use your rolls and sidesteps to avoid them. She mixes in dashes and other projectiles to try and hit you while you’re dodging, so be sure to keep an eye out for all of those attacks.

Gondul also has her own Heel Stomp attack bringing up fire from the ground she’s about to stomp on. The fire will come up first, so be sure to avoid that. This is also the best time to punish her when she makes her landing, as she will be vulnerable after missing.

Hildri is an Ice-type Valkyrie: use your Blades of Chaos to take her down. She will have plenty of the usual Valkyrie attacks like the wing combos and scythe attacks. She’s basically an ice version of Gondul.

Her first specialty attack is Hail Projectiles, which launch from her midsection. They will track you, but you can block until the final projectile, which is unblockable. A red flash will appear before she launches this, so ready a quick side-step and you’ll be ok.

The Valkyrie Queen, Sigrun, has every move the other eight warriors did, except for the summoning ability. Though this will be familiar by now, she is still a worthy opponent. The area you fight Sigrun in is much bigger than the others, so you’ll have plenty of room to avoid her attacks.

There’s not much else to say about Sigrun that hasn’t been covered above. Be patient and remember how you avoided the other Valkyrie’s attacks and you’ll be ok.