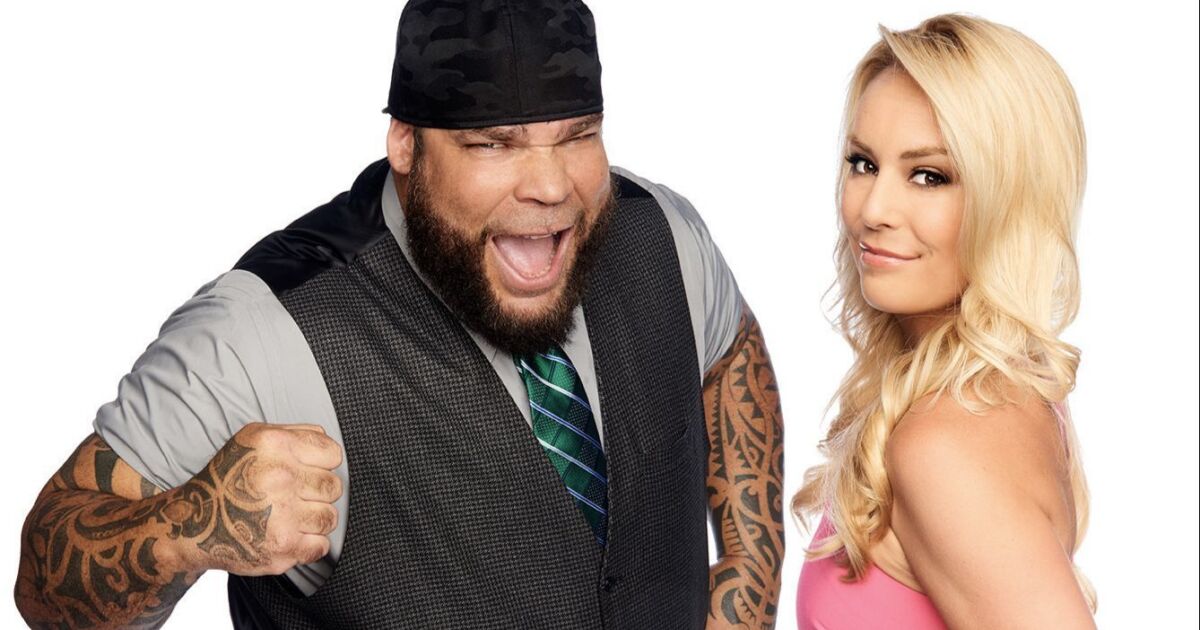 Whenever longtime Fox News executive John Finley walks through an airport in Dallas carrying a bag emblazoned with his company’s logo, strangers who are viewers of the cable channel come up to him and say, “Thank you.”

The words are less kind when he’s in politically liberal strongholds such as New York or Beverly Hills. But Finley believes the devotion to the conservative-leaning cable news channel in red states is deep enough that fans will shell out an extra $5.99 a month for an over-the-top streaming channel with Fox programming.

The one element of Fox News that Fox Nation won’t have is live news — at least not yet. The advertising tagline for the service is “Opinion done right,” a play for the audience tuning in to the channel for conservative viewpoints. “It’s not a news product in the traditional sense of the word,” said Finley, senior vice president of development and production for Fox News.

Fox Nation is part of a movement by the major players in the TV news business targeting the growing number of viewers gravitating to streaming video and bypassing traditional pay-TV subscriptions. NBC News — which operates cable channel MSNBC — is launching a free over-the-top ad-supported streaming service next year and is already testing programming for it on NBCNews.com. CNN is also studying concepts for a direct-to-consumer streaming service but has not announced any launch plans.

Audiences for cable news tend to be older than the streaming crowd — the median age for MSNBC’s prime-time viewers is 67, followed by 66 for Fox News and 61 for CNN, according to Nielsen data. But the channels need to get their brand names in front of the younger consumers who are growing up without the pay-TV habit. In the current 2018-19 TV season, prime-time cable and broadcast TV usage has declined year-to-year by 15% among viewers ages 18 to 34, according to Nielsen.

I think if you are a news operation and your mission is to serve the public then you have to be on every platform.

CBS has attracted a younger audience with its 4-year-old free, ad-supported streaming news channel CBSN, which has its own dedicated anchors and original documentary unit. The median age of its viewers is 38, more than two decades younger than the audience tuning in to the broadcast network’s Sunday newsmagazine “60 Minutes.”

It’s difficult to say how well these streaming platforms are faring. There are no third-party services that provide measurement data for streaming. CBS’ internal research shows CBSN is averaging 1 million streams per day — a fraction of the 6.6 million viewers who typically watch the half-hour “CBS Evening News with Jeff Glor” each night on TV.

Still, the value of CBSN, which the company says is profitable, is its ability to reach an audience not in the habit of watching an evening newscast.

“I think if you are a news operation and your mission is to serve the public then you have to be on every platform,” said Christy Tanner, executive vice president and general manager for CBS News Digital. “That should be core to your brand.”

But the move into streaming also carries risks for cable networks. While courting new viewers, they have to be careful not to hasten the rate of cord-cutting and divert income from pay subscribers that will help boost revenuesin 2018. Thanks to the almost addictive viewer interest in the fascinatingly chaotic made-for-TV Trump White House, Fox News is projected to have revenue of $2.8 billion this year, followed by CNN ($1.58 billion) and MSNBC ($840 million), according to data from S&P Global Market Intelligence.

Audience levels for the cable news channels — which are live most of the day — have remained stable this year while most networks that depend on scripted shows that can be watched online or via DVRs at any time have been falling. Fox News ranks first year-to-date with 2.5 million viewers in prime time, followed by MSNBC (1.8 million) and CNN (996,000), according to Nielsen data. Together with sports channels, they remain powerful factors in consumer decisions to keep their pay-TV subscriptions.

Even as the news channels thrive, winter is definitely coming for the cable bundle. Research firm MoffettNathanson estimates that since 2010 nearly 11 million households have either ended their cable or satellite subscriptions or bypassed them altogether. S&P Market Intelligence said 1.2 million homes dropped pay TV in the third quarter of 2018 alone.

With every dropped subscription, cable channels lose revenue and a connection into a consumer’s home.

Tim Hanlon, chief executive of Vertere Group, a media consulting firm, said the continued decline of pay-TV subscribers is inevitable and networks need to be ready for it by extending their brand names and programming with over-the-top streaming services.

“All of these services are hedges on having some kind of direct-to-consumer pathway,” Hanlon said. “It’s preparation for whatever happens to the cable bundle.” 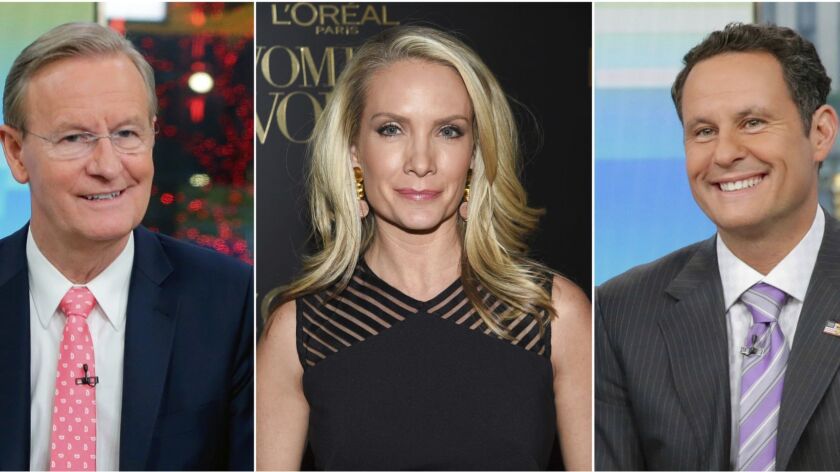 The Fox Nation streaming service will include Fox News Channel personalities Steve Doocy (will host a cooking show), left, Dana Perino (will have a book club) and Brian Kilmeade (will host a show called “What Makes America Great”).

The features of Fox Nation — which include on-demand audio replays and video highlights of the most popular Fox News programs — were developed partly with the intent of not upsetting the network’s lucrative relationship with cable and satellite distributors.

That’s why Fox Nation is being marketed as a “complementary service” aimed not at cord cutters, but at Fox News fans who already watch the channel and want more of the no-holds-barred conservative political talk that gives it a large and loyal following. In addition to its signature hosts, the streaming service is giving shows to newer personalities such as Tomi Lahren, a 26-year-old pro-choice conservative, and Tyrus, a heavily tattooed, 6-foot-8, 360-pound pro wrestler whose right-of-center political views formed as he moved into a higher income bracket during his career. He will be teamed with former ESPN correspondent Britt McHenry on a twice-a-week talk show called “UN-PC.”

Fox Nation is also offering a weekly commentary show featuring Diamond & Silk, a pair of African American sisters whose real names are Lynnette Hardaway and Rochelle Richardson. The duo are known for their ardent support of President Trump on social media and as guests on the cable network.

But Finley does not rule out a time when Fox Nation could also provide live news coverage.

“It’s not part of the plan right now,” he said. “We’re going to learn a lot in the next several months after the launch about what people want. It could be the case down the road.”

Live news coverage will be a part of NBC’s service, which does not yet have a name. Like CBSN and ABC News Live, it will be aimed at getting the network’s news product in front of younger viewers less likely to watch traditional TV, said Nick Ascheim, senior vice president of digital for NBC News and MSNBC.

Ascheim’s group has already developed a nightly newscast for the service, called “NBC News Signal.” It opens with the network’s signature peacock logo and the voice of Chet Huntley, the legendary anchor from the 1960s. But the program has a millennial-age host — former Los Angeles-based local TV reporter Simone Boyce — who delivers stories in a less formal style than what viewers get on “NBC Nightly News With Lester Holt” or many of the news hours on MSNBC.

Although the streaming service will use the same news-gathering resources as NBC and MSNBC, it will not repeat any programming from the TV networks. It will also provide its own dedicated coverage of major stories and special events, even when MSNBC and NBC News are covering them as well, and carry its original long-form programs.

Fox News won’t disclose its investment in Fox Nation. But Finley, who has been with the channel for 19 years, said the service could be financially successful without reaching 1 million subscribers — the milestone that ESPN celebrated when its comparably priced streaming service ESPN+ reached the mark after five months. Finley described sales of Fox Nation subscriptions — which come with discounts and gifts for multiyear plans — as “robust.”

Initially, Fox Nation will not carry advertising, which means its hosts won’t have to fear social-media-driven boycotts in reaction to their commentary — a problem that has plagued some Fox News stars. But Finley does not believe he will have to rein in his talent.

“These are all people who have television experience,” he said. “This isn’t necessarily the Wild West.”

2:40 p.m.: This article was updated with the announcement of a new program on Fox Nation.

This article was originally published at 6 a.m.