“Far Cry 5” was one of the most underrated and best games of 2018, a title that served both as escapist entertainment and was willing to address actual violence in the heartland of America. Don’t get me wrong. I don’t think “Far Cry 5” was particularly deep when it comes to this country’s obsession with firepower and willingness to follow charismatic leaders into ruin, but it gets credit for being willing to go there at all. Most modern shooter franchises like “Destiny,” “Battlefield,” and “Call of Duty” don’t take place in 2019 for a reason. We see enough stark reminders of gun violence on the news that we don’t want it in our escapism. But “Far Cry 5” was willing to blow up the heartland, telling the story of a religious leader who amassed enough weapons to basically destroy the country. Somewhat surprisingly, “Far Cry: New Dawn” isn’t so much a sequel as a continuation of that story. And while it does remind one of the fun mechanics of the 2018 release in this series, it too often pales in comparison, feeling like an echo of greatness more than greatness itself. 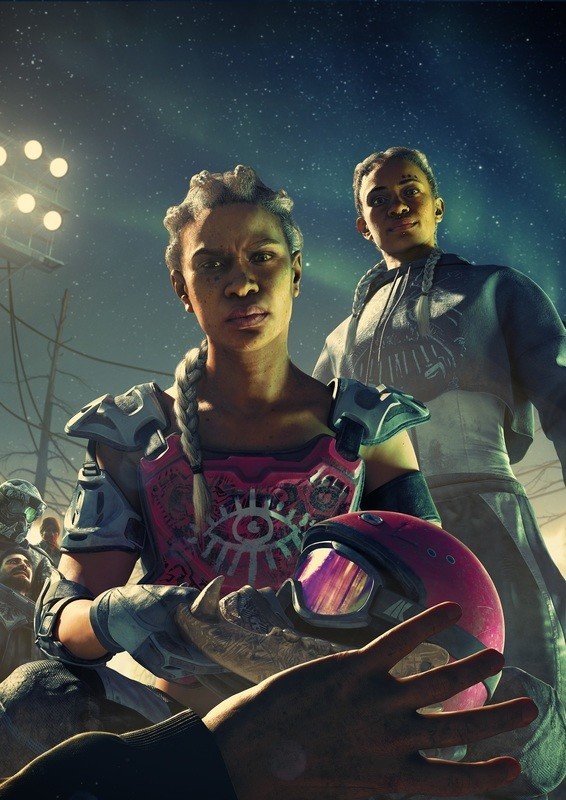 The end of “Far Cry 5” was one of its most daring moves in that they blew up the world. A nuclear weapon went off, and survivors had to go underground. It’s telling how much I liked “Far Cry 5” that I kept playing after the end of the world, exploring a map and searching for collectibles on a devastated landscape that I had traveled so many times that I knew it by heart. A revised version of that map returns in “Far Cry: New Dawn,” which takes place 17 years after “the Collapse.” The survivors who went underground and the children they had there are now trying to rebuild Hope County, facing off against marauders and villains known as the Highwaymen.

And that’s about it in terms of plot. Everything that was destroyed at the end of the last game, it is now your job to rebuild. And so you roam the countryside of Hope County looking for people to join the Resistance, you free Outposts run by marauders, and you upgrade and build your base, which is named Prosperity. Characters from the last game, including Joseph Seed, return, as do almost all of the mechanics, including the Roster feature, basic gameplay, and even the map. It often plays out like a really extended DLC, an extra chapter to a game more than a brand new one. (And, perhaps recognizing this, Ubisoft has priced the game 1/3rd lower than most new titles.)

On a design level, the best thing about “New Dawn” is that it’s no mere “Fury Road”-esque, post-apocalyptic vision. Overgrowth and animals have returned to the world, they’re just surrounded by burned-out cars and your occasional animal mutation. And the world often has a graffiti, colorful look, not unlike the crazy flora in “Annihilation.” I like that they didn’t go pure George Miller in their vision of the future, perhaps in part because these game have always relied on the natural world, which is angrier and crazier than ever in this iteration.

Reviewing “New Dawn” is an interesting venture because it comes down to what you want and expect from a sequel/spin-off. Personally, I’ve loved every “Far Cry” game since the third, and the gameplay has been largely the same since then, even with massive changes in the narrative from the past in “Primal” to the future here. If you approach “New Dawn” not as a sequel to the last one but as extra material related to it, there’s a lot to like. The gameplay is still dynamic, the world is detailed, and the action is addictive. However, the fact is that it doesn’t really do anything that the last game didn’t do better. When an album does incredibly well, studios will often release a collection of B-sides, outtakes, and deleted songs from the same recording session. That is perhaps the best way to look at “Far Cry: New Dawn.” If you’re a big enough fan of the band, you’ll want to hear it all. If you’re on the fence, maybe wait for the next official release.

Next Article: Toni Myers: Not All Stars Are in the Sky (1943-2019) Previous Article: Mr. Soul! Screens for Free Thursday, February 21st at the Apollo Theater

More moviegoers see films on video in some form than ever before — whether streaming on demand, cable or satellite, instant download services, DVD or Blu-ray. Even high-profile pictures become available to home viewers before or at the same time as their theatrical release. Reviewing them is a job for… The Demanders!

Our Far-Flung Correspondents are cinephiles from all over the world, hand-picked by Roger Ebert to write about movies from their unique international perspectives. They include contributors from (alphabetically) Brazil, Canada, Egypt, Great Britain, India, Mexico, the Philippines, South Korea, Turkey and the U.S. They converge every year at Ebertfest.

Since he started as film critic for the Chicago Sun-Times in 1967, and began covering movies locally and at international film festivals, Roger Ebert has met and interviewed countless movie idols, artists and unknowns — some of them even before they became famous. There’s hardly a major figure in the history of movies, from the last part of the 20th century into the 21st, that he hasn’t encountered.

Roger Ebert has attended international film festivals and events for almost half a century, from the Kolkata International Film Festival to the Academy Awards. In addition to his coverage, our contributors report the latest from Cannes, Telluride, Toronto, Sundance and other movie showcases world-wide.

“Life Itself,” based on Roger Ebert’s memoir and directed by Steve James, will open in theaters and be available On Demand on July 4, 2014.

The Cannes International Film Festival is the most talked-about film festival of the year, where directors from around the world showcase their newest work, from the most challenging art cinema to the big blockbusters. For many years, Roger Ebert and a team of contributors have covered Cannes, and we are continuing that tradition with start-to-finish coverage from around the festival.

A collection of tributes to Roger from various sources.

The opening shot of a movie can tell us a lot about how to view and interpret what follows. It can even represent the whole movie in miniature. The Opening Shots Project collects illustrated analyses of some of Jim Emerson’s favorites, and contributions from Scanners readers.