The Giant Panda, a warm blooded mammal originating from Southern and Eastern parts of China, along with most other animals, are heterotrophs. Heterotrophic organisms consume other organisms in order to acquire energy, rather than making their own energy. Unlike most bears, these pandas are neither nocturnal or diurnal, they are crepuscular, which means that they are both active during the day and night. The typical lifespan of a Giant Panda living in the wild is 20 years, though in captivity they are able to live up to 30-35 years.

Mother panda caring for her baby

Once a panda is born the mother cares for her young until they are able to venture out independently. Most mothers spend their time nurturing their cub, cradling it, and nestling it in the grass. These panda’s eyes do not open for about 6-8 weeks, and they are not mobile for about 3 months. Panda cubs tend to crawl at 10 weeks, and by 21 weeks these cubs are able to confidently walk on their own. This special bear species nurses for about 18 months but at 6-9 months also begins to eat bamboo. When they are about 2 years old they usually leave their mothers. After leaving their mother, they will wander for about 2-3 years until they are sexually mature enough to mate. During mating season, which is typically Autumn and Spring, the panda loses its appetite completely and the male pandas fight viciously to find a mate. The females usually stay around the same territory as their mother, while the male goes off to find a good feeding/breeding area.

Mother and her baby 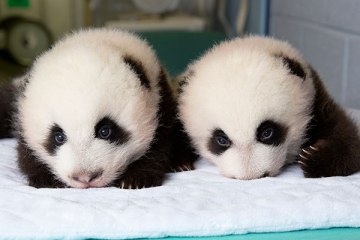 Although Giant Pandas evolved from carnivores, and have the digestive system of a carnivore, they depend almost exclusively on bamboo in their diet, and are therefore, more like herbivores. On the food pyramid, Giant Pandas are found at the second trophic level, which are the primary consumers, for they only eat bamboo and no other organisms eat them. Giant Pandas feed on different parts of the bamboo plant during different parts of the year in order to get the most out of the bamboo stick. They are also known to consume about 30 different species of the bamboo plant. These animals are able to consume 30 kg of bamboo a day as well and use their strong jaws to crush the plant to make it easier to consume. The Giant Panda also has symbiotic relationships with the bacteria and microorganisms in its stomach. The bacteria helps break down nutrients and vitamins that shape their immune system and aid in digesting food, which is known as commensalism.

The giant panda has many adaptions that help with its survival, due to the bamboo shoots that they consume daily. One of the most visually obvious adaptions this bear has is its sixth thumb used to pull the leaves and the shoots off of the bamboo stem. Another adaption the panda has is its digestive system. Due to the rough texture of bamboo, the panda’s esophagus and stomach contains a thick lining to protect it from getting cut by the bamboo, along with it’s larger colon and smaller intestines used to help digest the bamboo easier. Lastly, the panda bear’s large head is another important adaption that helps it eat bamboo. Their large jaw muscles and molar teeth allow them to break down the rough bamboo much easier, as well.

Due to their large size and isolated habitat, adult pandas have no predators though cubs are helpless until they are at least a year old. The cubs, in most cases, are preyed upon by leopards and different large birds of prey. The biggest predator of Giant Pandas happen to be humans, as humans are an extreme threat due to habitat loss through deforestation and land clearance for agriculture and farming. The threat of humans has become so great, that currently only 20 isolated mountain patches are left in the wild for these pandas to live.

Giant pandas typically spend around 12 to 15 hours a day munching on bamboo. Although it seems as if these animals only spend their days either sleeping or eating, they are known to be good at climbing trees and swimming. These pandas usually keep to themselves, for they mark their defined territory by spraying urine and clawing trees. They can find shelter in crevices of rocks or hollow trees, but they do not maintain a permanent den for living in. This is because they do not hibernate all year long, they move to different elevations where the weather is warmer.

This is a video of a Giant Panda using its teeth to eat bamboo shoots in China.