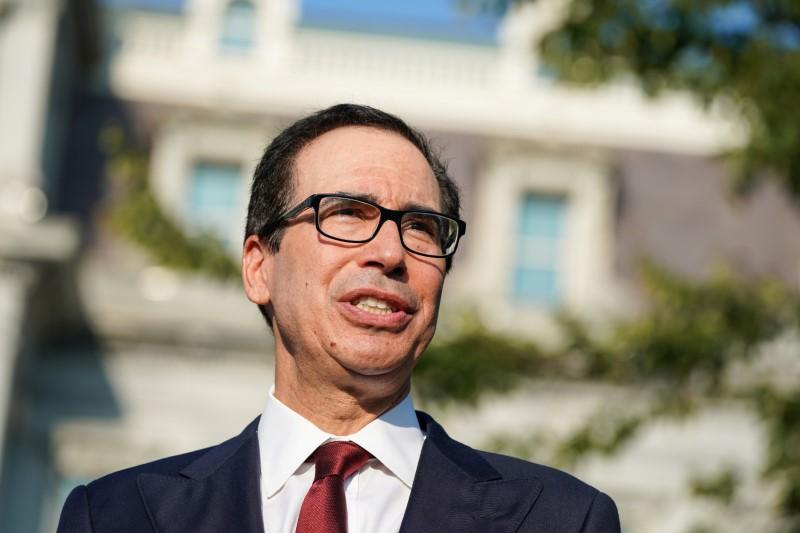 WASHINGTON (Reuters) – China’s commitments in the Phase 1 trade deal with the United States were not changed during a lengthy translation process and will be released this week as the document is signed in Washington, U.S. Treasury Secretary Steven Mnuchin said on Sunday.

FILE PHOTO: Secretary of the Treasury Steven Mnuchin answers questions from the press after an interview on CNBC on the North Lawn of the White House in Washington, U.S., September 12, 2019. REUTERS/Sarah Silbiger.

Mnuchin told Fox News Channel that the deal reached on Dec. 13 still calls for China to buy $40 billion to $50 billion worth of U.S. agricultural products annually and a total of $200 billion of U.S. goods over two years.

“It wasn’t changed in translation. I don’t know where that rumor started,” Mnuchin said on the “Sunday Morning Futures with Maria Bartiromo” show.

“We have been going through a translation process that I think we said was really a technical issue,” Mnuchin said. “And the language will be released this week. So I think it is — the day of the signing, we will be releasing the English version.”

“And people can see. This is a very, very extensive agreement,” he added.

White House officials had said as late as Friday that the final Chinese text was not yet completed, even as invitations went out to more than 200 people for a Jan. 15 signing event at the White House.

Thus far, Beijing has not confirmed those purchase commitments, and recent government actions here in the agriculture industry have raised questions over the $40 billion to $50 billion target cited repeatedly by Trump administration officials.

Chinese officials have been careful not to publicly discuss details of the Phase 1 deal, because Washington has changed its position multiple times during negotiations, three Chinese officials with knowledge of the situation told Reuters last week.

Signing of the trade deal on Wednesday eases Trump’s 18-month trade war aimed at altering China’s trade and economic practices, but will leave in place tariffs on about $370 billion worth of Chinese imports per year.

Those are expected to be addressed in Phase 2 negotiations, which the Trump administration wants to launch this year, covering thornier issues untouched by the Phase 1 trade deal, including Beijing’s heavy subsidies to Chinese state-owned enterprises and restrictions digital trade and cybersecurity issues.