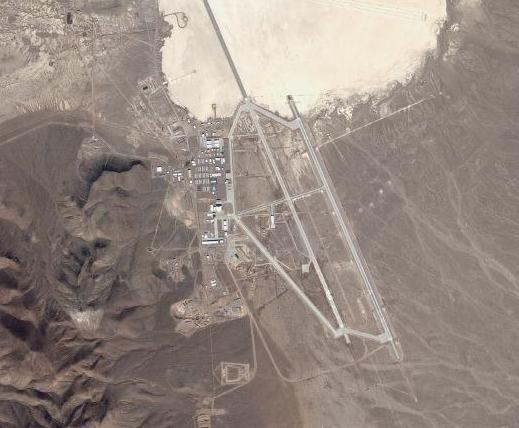 This article is about a fictional representation of a real world subject.

Area 51, officially known as Groom Lake Air Force Base, is a military installation located in Nevada, United States. The base is completely off-limits, giving rise to theories that it is a UFO crash site or an alien research lab. The base is crisscrossed by numerous runways, leading some to speculate that it is used to test prototype military aircraft.

In 2011, Raiden infiltrated Area 51 in order to rescue Sunny, the daughter of Olga Gurlukovich, with the help of Big Mama and the Paradise Lost Army. After Sunny was rescued from the base, Raiden was captured by the Patriots and turned into a cyborg but was eventually rescued.

In the overseas versions of Metal Gear Solid: Peace Walker, the Solid Magazine‘s cover briefly mentions Area 51. In addition, Chico briefly alludes to Area 51, although not by name, in the Mine Base briefing tapes, by stating that various secret bases were established by the U.S. military to store dead alien bodies and UFOs.

In Metal Gear Rising: Revengeance, the Men In Boxes (MIBs) are rumored to have originated at Area 51.[1]

The CIA officially acknowledged the existence and location of Area 51 for the first time in July 2013.[2]