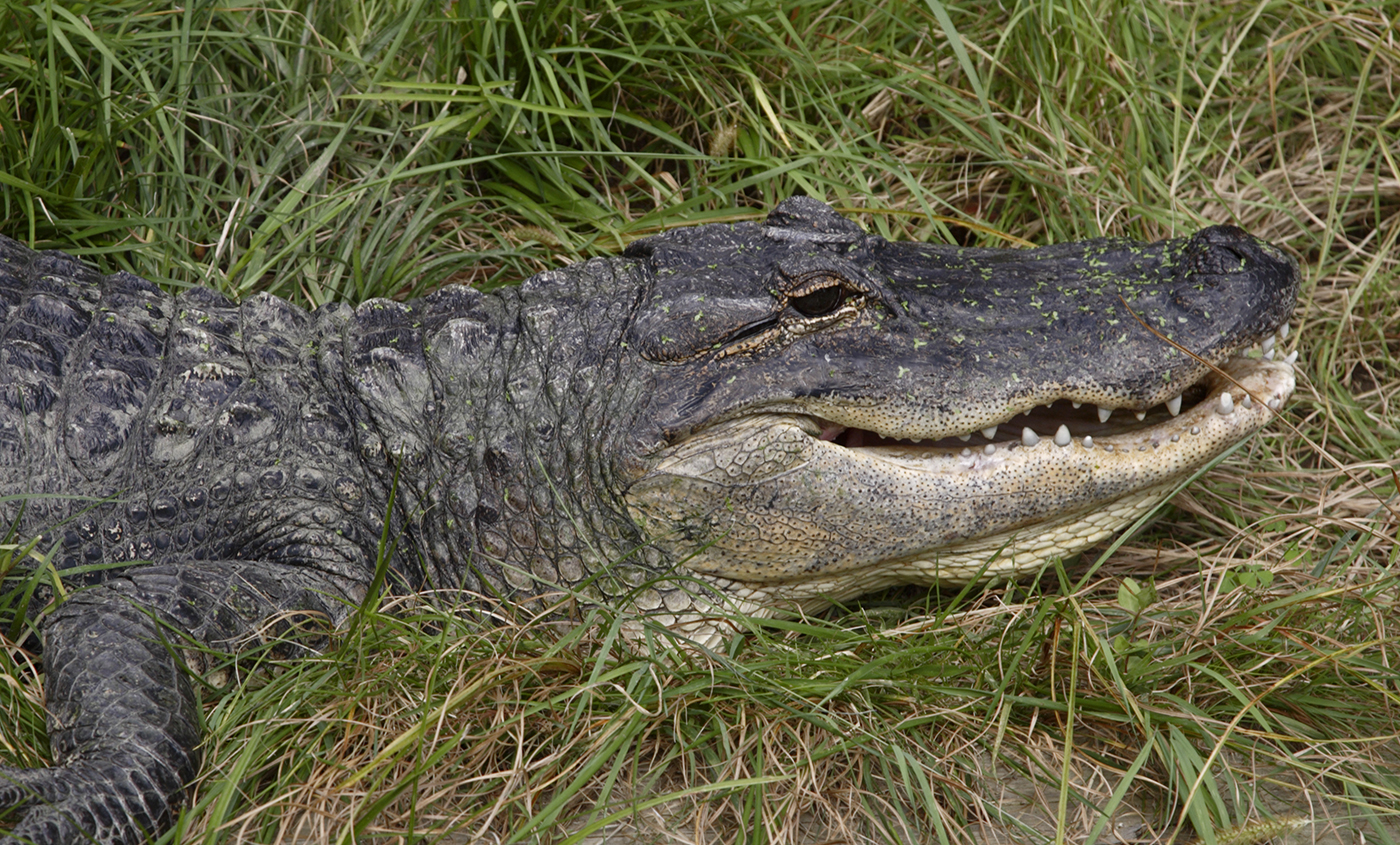 Similar in appearance to the endangered American crocodile, alligators are not endangered. They range along waterways in the United States from North Carolina to Texas’s Rio Grande.

Both males and females have an “armored” body with a muscular, flat tail. The skin on their back is armored with embedded bony plates called osteoderms or scutes. They have four short legs; the front legs have five toes while the back legs have only four toes. Alligators have a long, rounded snout that has upward facing nostrils at the end; this allows breathing to occur while the rest of the body is underwater. The young have bright yellow stripes on the tail; adults have dark stripes on the tail.

It’s easy to distinguish an alligator from a crocodile by the teeth. The large, fourth tooth in the lower jaw of an alligator fits into a socket in the upper jaw and is not visible when the mouth is closed. This does not happen in crocodiles. Alligators have between 74 and 80 teeth in their mouth at a time. As they wear down, they are replaced. An alligator can go through 3,000 teeth in a lifetime.

Male alligators are larger than female alligators. The average adult size for a female is 8.2 feet (2.6 meters), and the average size for a male is 11.2 feet (3.4 meters). Exceptionally large males can reach a weight of nearly half a ton or 1,000 pounds (454 kilograms).

The American alligator is found in the United States from North Carolina to the Rio Grande in Texas. Alligators are usually found in freshwater, slow-moving rivers. They also live in swamps, marshes and lakes. They can only tolerate salt water for brief periods because they do not have salt glands.

Alligators are carnivorous. They have very strong jaws that can crack a turtle shell. They eat fish, snails and other invertebrates, birds, frogs and mammals that come to the water’s edge. They use their sharp teeth to seize and hold prey. They swallow small prey whole. If the prey is large, they shake it apart into smaller, manageable pieces. If it is very large, they will bite it, then spin on the long axis of their bodies to tear off easily swallowed pieces.

At the Smithsonian’s National Zoo, American alligators are fed rats and occasionally rabbits.

Both males and females reach sexual maturity when they are about 6 feet (1.8 meters) long, a length attained at about 10 to 12 years. Breeding takes place during the night in shallow waters. Males (bulls) roar to attract females and to ward off other males. The male circles the female and mounts. Courtship starts in April, with mating usually occurring in early May.

After mating has taken place, the female builds a nest of vegetation. The nest can measure seven to 10 feet (2.1 to 3 meters) in diameter and two to three feet (0.6 to 0.9 meters) high. Then, around late June and early July, the female lays 35 to 50 eggs. Some females can lay up to 90 eggs. The eggs are then covered with vegetation and hatch after a 65-day incubation period. The sex of the juveniles is determined by the temperature of the nest. Temperatures of 31? C (87.8? F) or below produce females. A temperature of 32? C (89.6? F) produces 75 percent males and 32.5? C (90.5? F) and above are mostly females. Alligator nests are sometimes used by other reptiles for their own egg deposition and incubation.

Toward the end of August, the young alligators begin to make high-pitched noises from inside of the egg. This lets the mother know that it is time to remove the nesting material. When the baby alligator hatches it measures about 6 to 8 inches (15 to 20 centimeters). Newly hatched alligators live in small groups, called “pods.” Some 80 percent of young alligators fall victim to predators such as birds, raccoons, bobcats, otters, snakes, large bass and larger alligators. Females aggressively defend their young during these first few years. Crocodilians are one of the only orders of reptiles that offer maternal care to their young. The juveniles grow about a foot a year.

One interesting aspect of alligator biology is that even though they do not hibernate, they undergo periods of dormancy when the weather becomes cold. They excavate a depression called a “gator hole” along a waterway to be used when the seasonal temperature falls. In areas where the water level fluctuates, alligators dig themselves into hollows in the mud, which fill with water. These tunnels can be as long as 65 feet (20 m) and provide protection during extreme hot or cold weather. Many other animals also use these burrows after their builder abandons them.

American alligators live about 50 years in the wild. After they are 4 feet long, alligators are safe from predators except humans and occasionally other alligators.

Once on the verge of extinction, the American alligator has made a remarkable recovery due to strict conservation measures and extensive research. It is no longer endangered except in scattered areas of its range. However, the federal government lists it as threatened because it is very similar in appearance to the American crocodile. Because the American crocodile is endangered, the government does not want hunters to confuse the two different types of animals. Hunting is allowed in some states but it is strictly controlled. The greatest threat is currently destruction of habitat; this includes water management systems and increased levels of mercury and dioxins in the water.

Since alligators can become large and will feed on almost anything, they pose a mild threat to humans. In Florida, where there is the greatest alligator population, there have been several reported deaths due to alligator attacks in recent years and human-alligator conflicts are common. Dogs and other pets are also sometimes killed.